RERsports: Big 12 watch: Could BYU, Houston both get left out?; Texas lieutenant governor weighs in

While nothing concrete has come out in a while there has been plenty of speculation in recent days about Big 12 expansion.

Kirk Bohls of the Austin American-Statesman had thoughts on ifBYU and Houston could both be left out. He writes, “It seems clearer and clear that BYU isn’t getting into the Big 12. Just too many negatives for the conference, which knows all about negatives. Remember, it takes only three “no” votes to kill any expansion candidate, and BYU’s stance on its Honor Code, gays and lesbians, not playing on Sundays, the issues of it already having its own TV network and geographical distance from the Big 12 has definitely hurt the Cougars’ chances.”

He then talks about who might be included if neither of the Cougars gets an invite: “At this point, I think there’s just as much chance that the Big 12 invites Cincinnati and maybe South Florida to put the league in new TV (and recruiting) markets. People have slept on USF even though it’s invested more than $170 million into its sports infrastructure, plays in Tampa (the nation’s 11th biggest market) and is a Top 25 public research university.”

Texas Lt. Gov. Dan Patrick also had plenty of thoughts on the subject as shared by Mark Berman on Twitter. 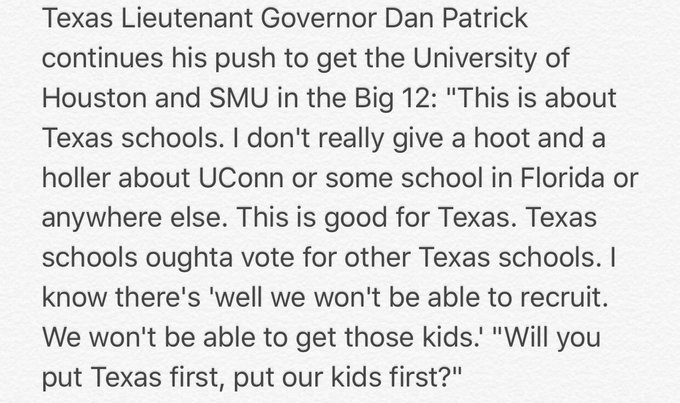